Revision guide for the whole syllabus (CIE)
Revision videos
Practice questions
Past Papers (CIE)
Posted by Ritij J. at Saturday, April 08, 2017 Links to this post
Email ThisBlogThis!Share to TwitterShare to FacebookShare to Pinterest 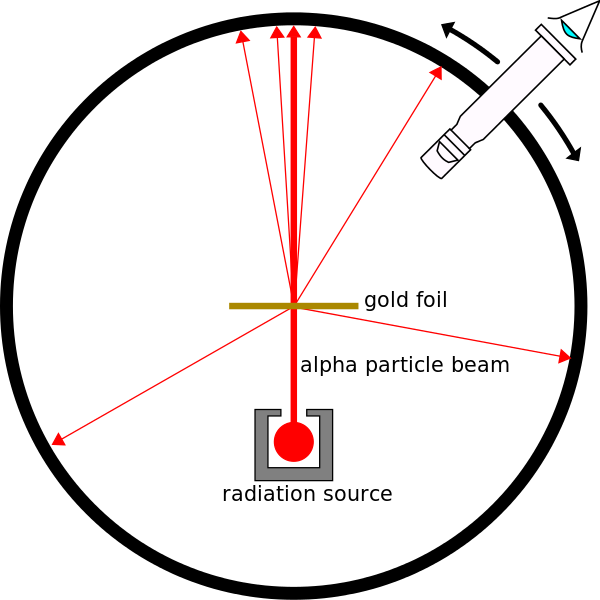 This apparatus was used to test the hypothesis of the plum pudding model of atom. A thin beam of alpha particle was shot through the very thing gold foil. The inside of the equipment was coated with zinc sulphide photographic film which would change color if alpha particles hit it. This allowed the scientist to see where the alpha particles went after they hit the gold foil.


A vacuum was created inside the apparatus to remove all the air so that the alpha particles are not obstructed by the air.


When the experiment was carried out, Geiger and Marsden discovered that not all alpha particles went straight through the thin gold leaf. Some of the deflected a little bit and very few came back to the source. With this information the concluded that there was a concentration of positive charge in the atoms which was causing the positively charged alpha particles to repel and delect back. The also concluded that only a small part of the atom had concentration of positive charge and the rest was empty space as the detected particles were very few and most other particles went straight through.

The deflection of alpha particles increases if we reduce the speed of the particles or increase the positive charge in the atoms, by having an element that has more protons.
Posted by Ritij J. at Saturday, April 08, 2017 Links to this post
Email ThisBlogThis!Share to TwitterShare to FacebookShare to Pinterest
Labels: P7 Radioactivity and Particles

Posted by Ritij J. at Saturday, April 08, 2017 Links to this post
Email ThisBlogThis!Share to TwitterShare to FacebookShare to Pinterest
Labels: P7 Radioactivity and Particles

Revision Guide For The Whole Syllabus


This is an excellent revision guide by Joshua Kwok.

As mentioned by the creator,

Includes:
- All topics covered in the syllabus
- Relevant past paper questions per topic
- Key Learning Outcomes + answers to them
- Important Equations for each topic
- 'Interactive' fill-in-the-blanks!!!!!

Link to the original document:
https://drive.google.com/file/d/0B5MbAIlRljDdUFRYckkyUE5ZWUk/view

Posted by Ritij J. at Tuesday, April 04, 2017 Links to this post
Email ThisBlogThis!Share to TwitterShare to FacebookShare to Pinterest

When a neutron collides with a uranium 235 nucleus it forms uranium 236 which undergoes fission. This fission of U-235 also releases neutrons that can collide with more uranium 235 nuclei if they are around hence triggering them to undergo fission as well. This repeats over and over again forming a chain reaction.

This site will no longer be updated until further notice.